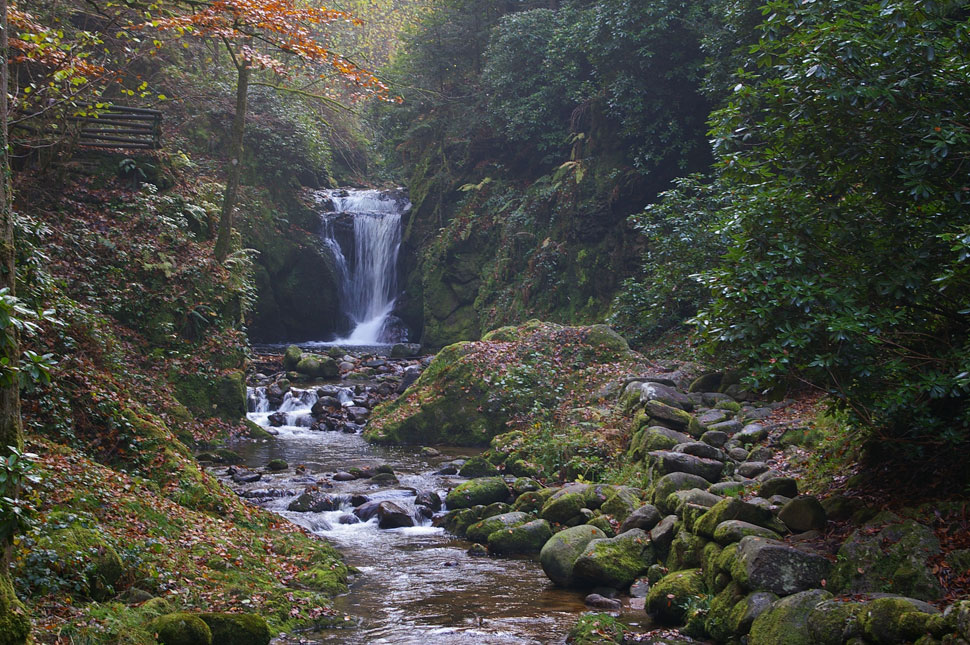 The Geroldsau waterfall is a roughly six meter high waterfall of the Grobbach south of the Baden-Baden district Geroldsau in the northern Black Forest .

The Grobbach springs from the precipitous west slope of the northern Black Forest in about 800 m above sea level. NN Height at Schwarzwaldhochstraße at Plättig / Bühlerhöhe . It flows northwards and unites in front of the waterfall with the Harzbach, which drains the northwest slope of the Badenerhöhe with its tributaries. At the waterfall, the Grobbach has an average water flow of 0.56 m³ / s. He falls here from about 291 m above sea level. NHN down to about 285 m . into a small boulder. After about one kilometer of flow, the Kerbtal valley widens to the wider valley floor of Geroldsau. At the mouth of the Oos in Lichtental the Grobbach is more watery and longer than the Oos.

The waterfall is a traditional excursion destination in the surroundings of the tourism-influenced city of Baden-Baden. In Geroldsau, Schwarzwaldhochstraße branches off a small road with several hiking trails, which pass the waterfall and the nearby excursion center Bütthof . In addition, the waterfall can be reached via a footpath along the Grobenbach. The environment of the Geroldauer waterfall was planted with Rhododendron bushes in the 19th century.

The Geroldsau waterfall is a geological natural monument . The nature conservation authorities, on account of its rarity, regard it as a whole worthy of protection and assign it to the highest of four classes of value. It lies within the 8.390 hectare landscape protection area of Baden-Baden.